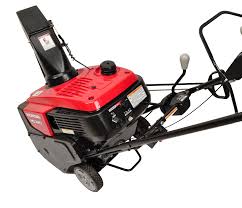 Honda designed and built the model HS720AM Snow Thrower for powerful, reliable performance in any snow conditions. The condition of the fuel is critical in the machine’s performance. Unfortunately, fuel can deteriorate in a short amount of time, which can corrode and damage engine parts. Also, the manufacturer’s limited warranty does not cover system damage and engine problems caused by substandard fuel. Thankfully, users can avoid problems and extend the life of their Honda Snow Thrower by following through with the manufacturer’s recommendations below.

During the Normal Operating System

Recommendation: Do not use fuel with more than ten percent ethanol.
Reason: Ethanol fuels attract water from the air and the resulting mixture of fuel, water, and air can corrode parts and damage the engine. Keep the tank full or near capacity because the air in the tank causes the fuel to become stale.

Three to Four Weeks Before Next Use

Recommendation: When not in use, owners should keep the tank full of fresh fuel, and then turn the fuel valve to the OFF position.
Reason: A partial tank has air inside that causes a loss of fuel quality; air causes the fuel to grow stale.

One to Three Months Before Next Use

Recommendation: If existing fuel has no stabilizer and tank is not full, fill tank to full with fresh gasoline.
Reason: A partial tank has air and oxygen which makes the gas go stale. The stale gas will cause poor operation and difficult starts.

Recommendation: Fill tank to capacity and add fuel stabilizer per the manufacturer’s recommendations.
Reason: A full tank of fresh fuel with stabilizer will keep the fuel fresh longer, and help the snow thrower run well.
Recommendation: When adding fuel and stabilizer to fill a partial tank, run the machine for ten minutes
Reason: Running the engine pulls in fresh fuel to make sure that the old, stale fuel is gone.
Recommendation: After filling the tank and adding stabilizer, turn the fuel valve to the OFF position and run the machine for three minutes to empty the carburetor. When empty, the machine will stop.
Reason: A small amount of fuel in the carburetor will go stale quickly from engine heat and exposure to air. Burning this fuel will set the stage for fresh fuel on the next start.

More than Three Months Before Next Use

Recommendation: Owners should empty the tank completely if they may not use the machine for more than ninety days.
Reason: The safe shelf life of fuel and stabilizer in the tank is less than ninety days. The stale fuel will not support good operation and may lead to damage and corrosion. Owners should drain the fuel tank completely by running the machine to use all fuel or draining it for use in a vehicle or other safe disposal.

Where to Buy Parts

if you need new parts, get the highest quality OEM replacements. Honda designed its machines to work smoothly and seamlessly under rigorous conditions and for many seasons of superior service. Get the parts you need at hondalawnparts.com, and keep your machine in top operating condition. You might also enjoy the basic maintenance and safety steps in our Service Guide for Honda HS720AM Series Snow Throwers.