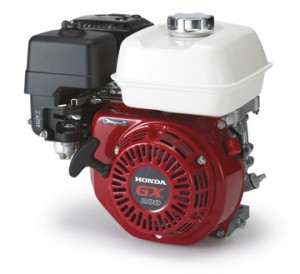 Is your Honda engine not wanting to start? Is it running rough, despite everything being fine with the fuel system and air filter? It may be having an issue with the ignition system. Here’s what you need to know to troubleshoot common electrical problems on these motors.

If the engine has been running, it needs to be left to cool for at least a half hour before working on it to prevent burns.

To access the flywheel on some models, the engine shroud/starter cover needs to be removed. On GCV models, this shroud is connected to the fuel tank. If the engine has a fuel valve, turn it off before unbolting the tank, and make sure the tank is tilted over a container to catch any fuel that leaks out.

Most recent engines come equipped with Honda’s Oil Alert system, which shuts down the engine if the oil in the crankcase is too low, preventing internal damage. This system works by wiring a float into the ignition system: if the float is too low, the ignition circuit is cut, which prevents the spark plug from firing. Generators and engines with a built-in console will have a light that indicates whether or not the system has been activated. For other engines, the only way to see if the system may have tripped is to check the oil level.

Most engines also come equipped with kill switches that will cut power to the ignition system. This switch will be located on the engine, but it may be operated from a remote location, such as a bail on a lawn mower handle. Both the kill switch and the Oil Alert float connect to a single wire on the side of the coil. If this wire is damaged or becomes disconnected, the spark plug won’t fire. If the kill switch is damaged, it will need to be replaced. There should be two wires next to the switch that can be disconnected by pulling them apart, as well as a grounding tab located on the back of the switch that should be bent back. On most models, the starter cover will need to be removed to access the tab.

In a car, the power generation system is contained in the alternator, but in a small engine, the generator components are separated and mounted on and around the flywheel. When the engine is running, magnets on the flywheel pass by a coil, creating electricity. This electricity is stored in the coil until it is needed.

If the flywheel is damaged or the key that keeps the flywheel in position on the crankshaft has fallen out or sheered off, the timing will be off. If the insulator inside the coil has worn out or the insulator over the spark plug wire is damaged, there won’t be enough electricity making it to the plug to ignite the fuel.

When replacing the coil, there needs to be a small gap between it and the flywheel. The easiest way to set this gap is to place a business card between the flywheel and the coil, then tighten down the bolts enough to keep the coil in position. A feeler gauge can be used to set the correct gap, specified in the repair manual, before fully tightening the bolts.

For most engines, Honda recommends replacing the spark plug at least yearly, while each model has recommendations based on operating hours. A worn electrode will have too wide of a gap to get a good arc, while a damaged insulator could be shorting out the spark plug, transferring power to the engine instead of out through the electrodes.

Where to Get Parts to Fix Your Honda

If it’s Honda, you can get it from www.hondalawnparts.com. We’re a certified Honda Small Engine dealer, and our massive parts warehouse means we have most parts ready to ship across the U.S. and Canada so you can get your equipment back to work quickly.