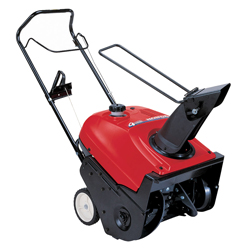 Honda Power Equipment has a reputation for providing the homeowner with exceptional machines that improve the snow blowing experience. The HS50 is no exception. The HS50 single-cylinder engine displaces 200 cubic centimeters and puts out 5 horsepower at 1,800 revolutions per minute driving models on wheels or tracks. Fuel tank capacity is 3.5 liters (0.92 gallons), enough for more than two hours of continuous operation. Maximum snow-blowing distance is nearly 40 feet, and snow-clearing capacity is more than 20 tons per hour.

For safe operation do not allow children to operate the HS50, and keep children and pets away from the area of operation. Before use, inspect the area to be cleared of snow for unseen obstacles. Never clear snow from gravel surfaces as the HS50 will pick up loose rocks and fling them about. Do not use the HS50 in conditions of poor visibility or at night under poor lighting.

Inspect the HS50 before each use. Adjust the discharge chute so that snow does not strike bystanders, passersby, and vehicles. Keep away from the discharge opening, and turn the engine off before unclogging the discharge guide.

During operation, hold the handles firmly and operate the machine at a constant pace. If there is a need to stop quickly due to a pet or a child, immediately release both auger and drive clutch levers to disengage the snow-blowing and drive mechanisms to stop all external moving parts safely. If the machine hits an obstacle such as a rock, stop the engine at once, check for damage, and do not resume operation before repairing any damage found.

Exhaust gas contains toxic carbon monoxide, so the engine never should run indoors without adequate ventilation. Refueling should be in a well-ventilated area with the engine off.

The two-position engine switch with an attached thin metal ring is on the right side of the console behind the fuel tank and in front of and below the long handles with operating levers for the auger clutch on the operator’s right and the drive clutch on the left. Turning the switch fully clockwise starts the HS50.

Turning the fuel valve handle in the middle of the console to the left of the engine switch  fully counter-clockwise opens the fuel line from the tank to the carburetor; turning it fully clockwise cuts off the power. The switch should be in either extreme position, never in between them, at all times.

The choke switch on the console to the left of the fuel valve knob is for use when the engine is slow to start, often in cold weather. The starter grip on the opposite, right end of the console when pulled spins the recoil engine starting mechanism.

The two-position, up for high, down for low, throttle lever in the lower part of the operator’s right side of the machine by the carburetor controls engine speed in place of an accelerator. In most circumstances, the operating position is for high speed. The shift lever on the operator’s left side just below the drive clutch lever operates gears for low, medium, and high forward speeds and for reverse.

The fuel filler cap is at the top of the fuel tank. Use any regular grade of gasoline. Neither oil/gasoline mixtures nor gasoline substitutes of any type are suitable as they may harm fuel system components. There should be no spilled fuel in the area when the engine starts. Do not refuel in or around snow because it gets into the tank easily and causes engine malfunction.

Remove the oil filler cap with the machine on a level surface and check the oil level. If low, fill to the top of the filler neck with oil of high viscosity (10W–30) in warm and low (5W–20/30) in cold weather.

When using the manual starter, the operator should not allow the rope to snap back but should return it gently, or the starting mechanism might get damaged. For the same reason, it is hazardous to pull on the starter grip with the engine running. Allow the engine several minutes to warm up before engaging the drive wheels or tracks. If the choke is closed, gradually reopen it for normal airflow as the engine temperature rises.

To blow snow without moving the machine, squeeze the auger clutch lever only and maneuver the machine manually. For best results, clear the snow before it melts, refreezes, and hardens into ice.

If you are performing the above maintenance checks and find that your Honda HS 520 is in need of repair and parts, use the online parts search tool found on www.hondalawparts.com, to search for the part to get your snowblower back in action.