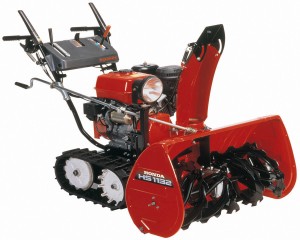 Snowblowers have made grade strides in recent years, with greater power and dependability across the board. Even so, virtually every model occasionally runs into at least a small problem that requires a bit of troubleshooting in order to diagnose and fix. The Honda HS1132 is certainly no exception to this rule. For those who are looking to address some of the most common issues without the help of a local service shop or technician, consider some of the most common problems listed below and how they’re most often solved by HS1132 owners.

Troubleshooting can be just as dangerous as actually using the equipment, and it’s therefore subject to virtually all of the same safety guidelines. In order to troubleshoot safely, make sure the equipment has been turned off and allowed to cool down. Don’t touch moving parts, or the snowblower’s auger, without appropriate gloves and protective eyewear in place. Finally, make sure that maintenance is conducted away from bystanders, children, and pets, in a well-ventilated area where the surface is solid and level.

Some of the most frustrating problems are the ones that affect the HS1132 snowblower’s engine. Though certainly inconvenient, each of these problems can be easily fixed by troubleshooting and checking for a few common oversights and mistakes that could have led to the problem.

If the engine wont’ start at all, the first thing to check is the engine’s fuel level. Insufficient fuel will certainly keep the snowblower sidelined, but refueling with high-octane, unleaded fuel will solve the problem in a matter of moments. If refueling the snowblower doesn’t do the trick, then there are some other things to check and change:

– The throttle position or choke might be improperly placed, and should be adjusted so that the engine can start successfully.

– The spark plug may be damaged, disconnected, or excessively dirty, and might be causing the engine to be unresponsive.

An electric starter’s malfunctioning is almost always attributable to one of two common causes: A damaged power cord or a defective electrical outlet. Check the cord and try an alternate outlet, and respond accordingly to the issue at hand.

3. Engine Suffers from a Loss of Power

An engine that loses power mid-task is generally an engine that has run out of fuel or encountered a significant amount of debris along the route. Stop the snowblower completely and check the fuel level. Refuel if needed, and then try using the snowblower again. if the problem is not solved, check the auger housing for an ice blockage or any debris that’s lodged in place. Clear the obstruction using only the snow clearing bar and then attempt to use the equipment again.

A low-powered engine could be the fault of very deep snow or a blockage near the auger. Consider using the snowblower at a slower speed, and going back and forth over deeper snow accumulations, to solve this problem. If this does not resolve the issue of low snowblower power, consider other common causes:

In addition to a number of common engine problems, some snowblower operators occasionally find that their HS1132 snowblower simply isn’t driving as it should. This issue can sometimes be resolved at home, but more serious repairs will require the expertise and attention of an authorized Honda service center.

A stationary snowblower is pretty alarming, but many causes of this problem can be easily identified and corrected. First and foremost, check the snowblower’s level of hydrostatic transmission fluid. Low fluid will cause the equipment to be largely immobile until the issue is resolved. It’s also worth checking the transmission lever’s position, since it will immobilize the snowblower if set to “released” or “neutral.”

If these fixes don’t produce results, then the snowblower might be suffering from damage to the drive belt or drive clutch lever. In both cases, professional service will be needed in order to resolve the problem and restore the equipment’s mobility.

Another common problem occurs when the snowblower can’t actually clear any snow after it has been turned on. This is almost always due to a blockage or obstruction in the auger housing, which prevents the auger from doing its most essential task. Shear bolts could also be broken or damaged, causing the same problem. In a small number of cases, a drive belt or primary belt could be damaged. If this is the case, professional service will be required.

Thanks to the online parts lookup tool at HondaLawnParts.com, it’s actually very easy to find the right replacement parts needed during troubleshooting. Equipment owners can search by part number, model number, or engine type, allowing them to get the exact part they need in no time at all.