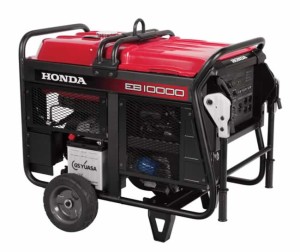 Choosing a commercial generator can be a pretty vexing process for today’s commercial and industrial business owners. Generators come in a number of different sizes and wattage ratings, with some providing 120V current and others offering a hybrid of both 120V and 240V. The specification lists can be confusing and all too similar, making a decision difficult to come by.

That said, all of Honda’s industrial generators are designed to make sure that businesses can remain in operation during a serious and extended power outage. Commercial and industrial customers have some great generator models to choose from, each of which has some unique benefits that will work with different types of businesses and different overall generation needs.

Industrial and commercial facilities typically require a great deal of power to stay online during a power outage, and that’s something that Honda has acknowledged with its impressive line of EB series generators. The company’s EB generators start at a wattage rating of 3,000 volts and quickly escalate to as much as 10,000 volts. While the entry-level EB 3000 model can supply 120V current, the higher-end models in this line offer 120/240V hybrid current that works with a far broader array of power equipment installations and industrial needs.

For smaller companies, the EG series might be a great choice. The generators supply between 4,000 watts and 6,500 watts of 120/240V hybrid current to commercial facilities. Best of all, the EG series is designed to be quite a bit smaller and more portable than the EB series is. For maximum portability, however, the EU series is an even better choice. Customers will enjoy between 1,000 and 6,500 watts of 120V power, with generators that can essentially be carried and placed into use on demand. They’re perfect for small facilities or for powering only basic services during an outage.

The trend toward electric starters is happening for a pretty obvious reason: Simply stated, it can be a real pain to start a generator by using a recoil cable and grip. That should not encourage buyers to simply abandon the recoil generator, however, as a recoil start is actually a really great option for a backup starter when the push-button electric starter just doesn’t perform as expected.

Many of Honda’s generators feature this recoil backup option, and a surprising number of the company’s models actually feature a recoil starter exclusively. While a bit more difficult than push-button electric starters, recoil models are compact, affordable, and reliable in high-stress moments when power is needed the most.

The Honda EU series of generators can run for between eight and 20 hours at full power, making them ideal for shorter outages or smaller uses overall. For extended generation and high-powered equipment, though, few generators compare to the EG or EB series. The EB series, especially comes with a very large fuel tank that can keep equipment running for between 10 and 20 hours, based on the amount of wattage being used.

The largest engines available to commercial customers are found in the EB series, making those generators particularly heavy and far less mobile than either the EG or EU options on the market. EU generators are the most portable, with many that can be carried and put into place by one person, or even just one arm. The middle-of-the-road EG series is a great compromise between these extremes.

Choose the Most Powerful, Most Portable Model Available

Overall, industrial generator shoppers owe it to themselves to pick the model that is most portable and most powerful. This will allow it to be useful in a wide variety of situations, from brief power outages to emergency situations and extended power losses that could affect productivity in a negative way.

The deciding factor between the EG, EU, and EB series of Honda generators will likely be the business’ size and its industrial commitment. Larger businesses generally need larger amounts of power, while smaller ones can often get away with the compact nature of the EU models.

Commercial generator purchases are often a big deal for companies that need to make sure their equipment and high-tech gear stays on and operational even during an extended power outage. For this reason, HondaLawnParts.com offers a wealth of industry experience as well as first-hand service and technical knowledge regarding the full line of commercial generators sold to business customers.

Additionally, those who choose HondaLawnParts.com for generators will have access to the company’s large selection of OEM replacement parts as their generator begins to require seasonal maintenance and tune-ups. An online parts lookup tool allows for these parts to be narrowed down based on the specific part number or model number needed, as well as the equipment type, engine type, and engine manufacturer. It’s a great mix of sales service, and support, for business customers.