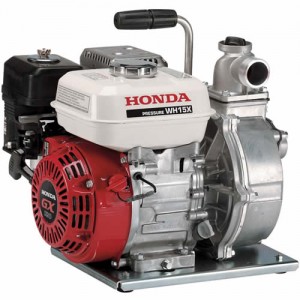 Honda’s WH15X provides water pumping power in an easy to move package, but even a device this useful is likely to see a few months of storage each year, not to mention numerous trips to work sites. With proper preparation, this pump can be fired up like it was new after months without use or many miles riding in the back of a truck.

If the pump is being stored with fuel in the tank or carburettor, it poses a fire risk. Store the pump in a well-ventilated area away from devices that can produce sparks or flames such as dryers, furnaces, power tools and water heaters. Avoid storing in high humidity areas to reduce rust.

Unless the fuel has been completely drained from the pump, the fuel valve lever should be set to “Off” to prevent fuel leakage. Always store the pump on a level surface.

Preparing the WH15X for Storage

Wash the engine by hand, avoiding the air cleaner and muffler opening to keep water from entering the engine. Water should also be avoided on the controls as they are difficult to dry, promoting rust. Wipe the engine and pump dry. Fill the pump chamber with clean water to prime it, then start the engine. The heat from the engine will evaporate any remaining water.

Once dry, stop the engine and remove the pump drain plug. Flush the pump with fresh water through the pump chamber inlet, then reinstall the drain plug once the water has fully drained.

Gasoline oxidizes over time, making it harder to ignite while leaving gum deposits that can damage the fuel system. There’s no solid rule of thumb on when fuel needs to be replaced because fuel life can vary widely depending on temperature, gas formulation and the amount of air in the tank. Before storing the pump for long periods, the remaining fuel should be drained from the carburettor and tank, or stabilized with a fuel additive.

When using a stabilizer, the engine should be run for at least 10 minutes to ensure the stabilized fuel has reached the entire fuel system. As always, prime the pump with before starting the motor to prevent pump damage. Shut the fuel valve after the engine has been shut off.

To drain fuel from the WH15X, position a fuel container and funnel beneath the carburettor. Remove the sediment cup and the drain bolt, mounted at an angle to the left of the starter handle. Open the fuel valve and let the fuel run out. Once the fuel has drained completely, reinstall the bolt and cup.

Getting the pump running again is fairly simple if it was prepared properly. If the fuel tank and carburettor were drained before storage, refill the tank with fresh gasoline. The pump can be operated using the same start up procedure used at any other time, however, the engine may smoke briefly due to the oil poured into the cylinder.

Shut off the engine and allow the pump to sit for at least 15 minutes to ensure the engine and muffler have cooled completely before loading onto a vehicle. Make sure the fuel valve lever is set to “Off” and set the pump on a level surface to reduce the possibility of fuel leakage. Afterwards, the engine can be started using the normal procedure.

Where can I Get What I Need to Put My Pump Into Storage?

www.hondalawnparts.com has everything you need to put your Honda WH15X into storage from fuel stabilizers to oil as well as any OEM part you may need to maintain your WH15X.