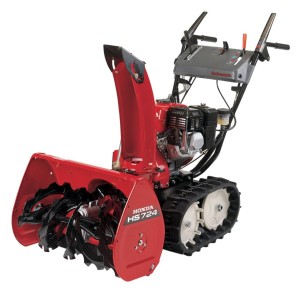 Using a Honda HS724 snowblower for the first time can be a daunting task for those homeowners who are entirely new to the equipment, with a number of controls and features that can seem confusing at first. Operation of the snowblower is actually pretty easy, however, as long as new owners acquaint themselves with the most important controls concerning basic starting, operation, and maintenance.

Snowblowers are extremely convenient throughout the winter, but they’re also extremely powerful by design and therefore a bit dangerous during regular option if strict guidelines are not followed. Before getting acquainted with the Honda HS724 snowblower’s features and controls, make sure the equipment is in an open area, on a flat surface, and that all obstructions have been removed from the pathways that will be cleared by the snowblower once it’s turned on and ready to go. Always wear proper eye protection and winter gear for maximum safety and minimal fatigue during use.

A Look at the HS724’s Essential Controls and Features

Operating the snowblower means working with controls that determine throttle speed, fuel levels, engine capabilities, and much more. Here’s what new owners of the equipment should know before getting started.

This valve lever controls whether or not the fuel line leading to the engine is opened or closed. If set to “on,” the snowblower will be able to access the fuel tank and turn on. When the snowblower is not in use, the lever should be switched to “off” to prevent unwanted starts and safety risks.

The chute crank controls which way snow is dispersed from the snowblower during operation. Turn it to the left to move the chute itself to the left side of the equipment, or turn it the other way to position the discharge chute on the right side of the snowblower. This can be changed on the fly, as needed, to ensure snow is properly discharged.

The starter grip ignites the fuel and starts the engine when the ignition key is switched into the “on” position. The grip may require several pulls before the snowblower is effectively started for general use.

The throttle lever controls the engine’s speed. When starting the snowblower “cold,” set the lever to the “choke” position. After the engine is started, it can be adjusted to either the “fast” or “slow” positions based on required engine speed during operation.

This lever puts the snowblower into neutral, and controls whether it goes forward or backward during general use.

This pedal adjusts the height of the snowblower relative to its tracks, or wheels. The pedal lifts the snowblower high for deeper accumulations, low for smoother and icier events, and to a middle-level height for average snowfall events.

These controls activate the drive controls and the actual snowblowing mechanism. They can be engaged or disengaged on the fly.

The self-propulsion mechanism is controlled by this level. If it’s set to “engaged,” the self-propelled feature kicks in and gives the snowblower a bit of extra mower. If operators set the lever to “released,” there will be no self-propulsion at all. This lever should never be operated while the engine is running, since doing so can cause extensive damage.

This bar can be used to clear any build-up or obstruction that causes the snowblower to stop functioning properly. It most often is used to clear the intake chute or the discharge chute. The snow clearing bar should only be used when the engine is off.

For Parts and More, Visit HondaLawnParts.com

HondaLawnParts.com is a great resource for Honda snowblower owners, with a wealth of information about regular operation and maintenance. Additionally, equipment owners will find a vast array of OEM parts that will keep their snowblower running like new for many winter seasons to come.