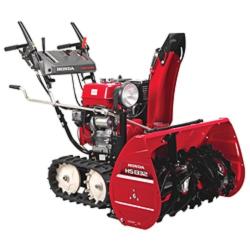 Snow blowers commonly encounter obstructions while in use, such as rocks or children’s toys. When an auger impacts a solid object, significant stresses are imparted to the auger, the motor, the gearbox, and the blower. To prevent damage to these expensive components, snow blower manufacturers commonly use shear pins or shear bolts that are designed to fail above a certain stress threshold. This will permit the auger to spin freely, thus relieving the stresses on it and the driveline. Honda uses shear bolts in their snow blowers.

Fortunately, replacing a broken shear bolt is not difficult.

Removing shear bolts entails working around the auger. This requires the user to exercise some basic safety precautions. First, shut off the motor and remove the key from the ignition. Visually inspect the rotor to ensure that it has stopped spinning. For added insurance, remove the spark plug. Next, ensure that the snow blower is on a flat, clear surface. There should be no obstructions around the machine. Clear the auger and the housing of any snow that may be in the machine to help get a better view of the bolts.

If a shear bolt does not immediately drop free of its slot and appears to be stuck, use a punch and an impact device to drive the bolt out of the hole.

When replacing shear bolts, Honda strongly advises in its owners’ manuals that owners avoid using conventional hardware bolts. Those bolts may withstand severe forces, thus imparting them onto the driveline. This can cause expensive damage to the snow blower.

To replace a shear bolt, simply insert the new bolt into the old hole, taking care to align the auger or blower first. If an impact that broke a shear bolt scratched or damaged the original slot for the bolt, it may be difficult to get a bolt into the hole. Carefully tap the new bolt into the hole, making sure to avoid damage to the new bolt’s threads. Once the bolt is in the hole, attach an 8mm self-locking washer to the protruding threads from the bolt on the other side of the hole and spin it onto the bolt’s threads. Use a wrench to hold the bolt head and tighten the washer down with a socket wrench.

Where to Buy Shear Bolts