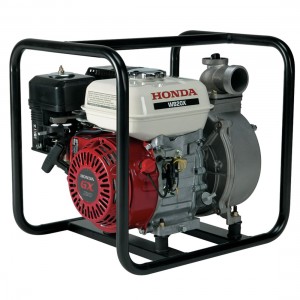 Honda’s products are renowned for their reliability, and the WB20T is no exception. Properly used and cared for, this water pump can provide years of service. However, before putting it to work, it helps to know how to safely use this piece of power equipment.

It is extremely important that the operator understands how to quickly shut off the engine in an emergency before using the pump. Never let children use the pump, and keep animals away from it during use.

This pump is only designed to pump fresh water and shouldn’t be used for any other liquid. Pumping flammable or corrosive liquids can pose a safety hazard, while pumping muddy water, chemicals or caustic liquids can damage the pump.

The pump should be kept at least three feet (one meter) away from buildings to ensure proper ventilation of both gasoline fumes and carbon monoxide from the exhaust. It should be placed on a level surface to prevent fuel spillage. A spark arrester is available for the WB20T, and may be required by law in some areas to prevent fires.

The muffler may remain hot long after the engine has been shut down. Give it some time to cool down before working around the exhaust or performing maintenance.

Before Operation: Hoses, Inspections and Priming

If the pump is consistently used at elevations over 6,000 feet above sea level, the carburetor should be re-jetted to get the correct fuel/air ratio.

This pump should be used with a reinforced wall or wire braided suction hose to prevent collapse. Remember: the shorter the hose is, the less time it will take for the pump to prime the line. Use the shortest hose needed for the job to reduce start-up time. A fabric exhaust hose should be attached using a hose band to ensure it stays in place under high pressure. Like the suction hose, size makes a difference: the shorter the hose is and the larger it is in diameter, the less fluid friction it will exert, increasing pump efficiency. Inspect the strainer and remove any debris before using the pump.

Engine oil should be checked before each use. To do so, remove the oil dipstick at the bottom of the engine by the pump. Wipe away any oil, re-insert the stick, then remove it, checking the marks at the end of the stick. If the oil level is low, add additional oil before starting. 4-stroke oil meeting standards SG, SF/CC, CD or greater should be used. 10W30 is recommended, but 10W40 can also be used as can 20W40 and 20W50 at temperatures greater than 15 degrees F (-10 degrees C.)

Before starting the pump, fill the priming tank with water. Running the pump dry can cause enough heat to destroy the pump seal.

– Turn the fuel valve to “On” and close the choke.

– Pull the throttle lever open slightly. It’s located below and to the right of the air filter.

– As the engine warms up, gradually open the choke. Once it is in the fully open position, adjust the throttle to set the desired pump speed.

In an emergency, turn the engine switch to “Off” to immediately shut off the engine.

Under normal circumstances, do the following:

– Move the throttle lever downward to the fully closed position.

– Turn the engine switch to “Off.”

The tank on the WB20T holds 0.71 gallons (2.6 liters) of fuel. The engine is designed to run on standard automotive gasoline with an octane rating of at least 86; light knocking is normal under heavy loads, but an engine that persistently knocks or pings needs to be professionally repaired. The engine can use gasoline blended with up to 10% ethanol.

Where can I Buy Parts for My WB20T?

hondalawnparts.com carries a full line of OEM parts and accessories for all of Honda’s small engine equipment including water pumps like the WB20T.