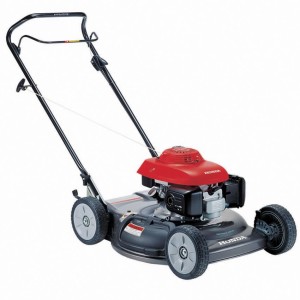 For those homeowners new to the Honda HRS push mower, starting the equipment can seem pretty intimidating. After all, this is a relatively advanced walk behind mower that features self-propulsion, a throttle control, and other operator comforts that simply cannot be found on competing options. Getting acquainted with these controls will provide for a safer, more consistent mowing job overall. Here’s what operators need to know before getting started.

Operator Precautions: What to Know Before Starting the HRS Mower

Never start the Honda HRS mower, or any other lawn mower, in an enclosed space. This significantly increases the risk of injury to the operator, and could expose them to carbon monoxide poisoning or dangerous fumes from the mower’s fuel. Furthermore, it could increase the risk of the mower encountering dangerous debris.

For those who are new to the Honda HRS, be sure to practice starting the equipment in an open area away from other people. Use this practice area to perfect the mower’s step-by-step technique for startup and only use the mower after perfecting these skills.

Getting Going: How to Start the Mower for the First Time

Starting the Honda HRS lawn mower is relatively easy, but it does involve a step-by-step procedure that involves more than just the mower’s pull-cord. Here’s how to start the equipment safely and effectively every time.

The drive clutch lever is used to engage the mower’s self-propelled operating feature. Release this lever when starting the mower to prevent the equipment from immediately propelling itself forward when the engine turns on. Hold the flywheel brake lever tight to the handle, however, as this must be done to allow the mower to start.

Give the starter grip a light pull until it begins to resist. At that point, give it a hard pull. Do this until the engine turns on and stays on. Keep holding the flywheel brake lever at all times.

Switch the throttle from the “choke” position to the “fast” or “slow” positions based on desired mower speed. The mower is now ready to perform its job!

Using the Controls to Adjust Mowing Speed and More

The great thing about the Honda HRS lawn mower is that it can be controlled using the included throttle lever and self-propulsion mechanism. Learning how to control these highly desirable features will help homeowners mow quickly and efficiently, without spending too much energy in the process.

The mower’s throttle controls its mowing speed. Generally, “fast” is the best setting. This allows the blades to spin very quickly, creating an upward fan motion that creates a more consistent cut. Of course, “slow” might work better for some homeowners and it’s certainly a great option to use if the other setting is simply too brisk.

In addition to controlling blade speed, owners can control the forward speed of the equipment. This is done using the shift lever, which has first, second, and third gears. First and second gear control forward speed during operation, while third gear is generally used only for transporting the mower across paved surfaces or parts of the lawn that were already mowed.

When engaged, this lever turns the self-propulsion mechanism on and guides the mower forward. When released, the mower must be manually pushed.

This lever is alternately known as the “safety,” and it must be held tight to the handle at all times in order for the mower to remain on.

Finishing the Job: How to Stop the Honda HRS When Work is Done

When the lawn is fully mowed and it’s time to finish up, stopping the mower is a relatively easy process. To begin turning off the equipment, operators should move the throttle into the “slow” position. Next, release the drive clutch lever and then the flywheel brake lever. When the mower’s blades have stopped spinning and its engine has turned off, take one last step and switch the fuel valve back into its “off” position. The mower is now ready for safe storage in a garage or toolshed until its services are needed next time.

HondaLawnParts.com has an extensive lineup of parts and replacement filters for the Honda HRS lawn mower, giving homeowners an easy way to maintain their equipment and ensure its efficient operation throughout the warmest months of the year. With an intuitive parts lookup tool and lots of great mower resources, the site is a destination for any Honda owner.