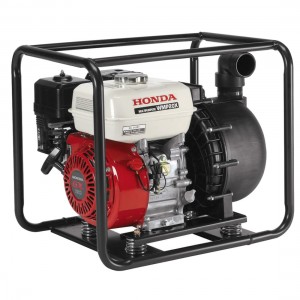 What is a head, and why is it important? What causes cavitation, and why is it bad? If you’re looking into buying or fixing a water pump, some terms that are used can be confusing. This guide will walk you through meanings and specifications so you can make the right choices when buying, operating, and maintaining a pump.

The Parts of a Water Pump

Consumer water pumps nearly always use an impeller to move water. This is a rotating disc with vanes on it that resembles a fan.

The impeller is held inside a housing called a “volute” or “volute case.” It’s designed to direct water toward and away from the impeller. A tight fit ensures pressure can be maintained.

The impeller is driven directly by the engine. The mechanical seal allows the motor’s crankshaft to spin the impeller while preventing water from leaking out onto the engine. Despite its name, a mechanical seal is made up of several parts including multiple seals and at least one spring to create a tight seal around moving parts.

The head is the maximum height water can be pumped between two points in the pump system.

“Static” measurements are the maximum head capable between these two points, while “dynamic” measurements take into account friction from moving water through hoses, fitting, and other parts of the system. These are quoted based on the hoses that are supplied or recommended for the pump.

Total head is measured from the water surface to the end of the discharge hose.

Pump pressure is measured in PSI (pounds per square inch) and is equal to the head multiplied by 0.433. Pressure is usually quoted for performance curves because it stays the same regardless of how the hoses are set up.

Centrifugal pumps depend on the atmospheric pressure pushing down on the water, which limits the total head to 26 feet at sea level, dropping about two feet as altitude increases 1,000 feet. This means a pump working at a high altitude won’t be able to pump water as far as the same pump near sea level.

Standard vs. Trash Pumps: A standard water pump is designed to pump water and little else, while a trash pump can handle small debris like sand. The main difference between these two pumps is the durability of the mechanical seal: a trash pump has a heavy duty seal that is more abrasive resistant.

Self-priming: Some pumps need to be primed before starting by pouring water into an opening in the volute case. Most modern Honda pumps are “self-priming” which means the seal between the impeller and the volute case is tight enough that it can pump out air and create enough of a vacuum to pull water through the intake hose when starting up.

Things That Are Bad for Your Pump

Cavitation: Water boils at lower temperatures when at high altitudes because the reduced pressure lets the water turn into vapor more easily. As water reaches the impeller, the vacuum can cause a drop in pressure that is enough to cause water to boil even at room temperature. As this water pressure moves from the suction side to the discharge side of the volute case, the pressure increases suddenly, releasing a large amount of energy that can damage the impeller. This is avoided by engineering the volute case with a large intake fitting which is matched by an equally sized hose. Water pumps should never be used with a hose that is smaller than the intake since the pressure difference increases the chance of cavitation.

Water hammer: If the water moving through the pump system suddenly stops, the pump acts on a much smaller amount of water, creating a pressure wave that can be strong enough to damage the volute case. This is usually caused by a long discharge hose becoming blocked, causing a spike in water pressure.

Getting the Right Parts and Accessories for Your Honda Water Pump

Want OEM parts designed for your Honda water pump to maintain its reliability and performance? www.hondalawnparts.com is a certified Honda small engine equipment dealer, and they can ship anything you need to any address in the U.S. and Canada.