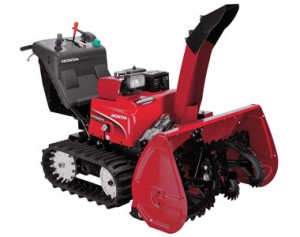 Even if you have plenty of experience using a snowblower, the Honda HS1336iAS is nothing like any machine you’ve used before. Its hybrid drivetrain is unique in the industry, while features like automatic speed control and a tiltable auger are rare in this market. Here’s what you need to know to get up to speed with Honda’s most advanced snowblower to date.

1. Turn the fuel valve to “ON”
2. Move the shift lever into neutral (N.)
3. Turn the engine switch to “START.” Release once the engine starts. If it hasn’t started after 5 seconds of cranking, release the starter and wait 10 seconds before starting again to keep the starter motor from overheating.

If the engine doesn’t start after 5 attempts, push and release the manual start lever, next to the fuel valve, then try the electric starter again. If it still doesn’t start, push in the start lever and try starting.

Once the engine is running, move the throttle to “SLOW” and gradually increase the engine speed as the motor warms up.

Setting the Skid and Scraper

1. Lower the auger to the ground using the auger control switch.
2. Shut off the engine and remove the key from the ignition switch.
3. Loosen the bolts on the skid and set the height according to the surface being cleared:

For operating over gravel, raise the auger by ½ inch and lower the skids until they are 0.3 inches from the ground. Keep in mind that this isn’t foolproof and it’s still possible that the auger will pick up and throw rocks.

For hardened snow, raise the auger as high as possible and lower the skids until they touch the ground.

For clearing pavement with regular snow, raise the auger 0.4 inches off the ground and lower the skids until they touch the ground.

The height adjuster has three settings:
High — when clearing snow in multiple passes or when backing up the snowblower.
Middle — Normal clearing
Low — Hardened snow

Auger angle can be set using the tilt control. Holding the control once the auger has reached the end of its movement can overheat the adjustment motor, keeping it from moving until the motor cools down. The auger can be returned to its original position by pushing “RESET.”

Set the work mode with the transmission in neutral (N.) Choosing the right mode depends on how you need to use the snowblower:

Auto — The snowblower adjusts speed and power automatically. This is the quietest mode and requires less input from the operator.
Power — Allows the operator to adjust the speed while in motion to match the current workload, while the snowblower manages the throttle. Offers the maximum throwing distance and clearing speed.
Manual — Gives the operator full control of the throttle and drive speed.

In Power and Manual modes, the shift lever controls the snowblower speed. Low range is recommended for most snow, while fast range can be used for light snowfall.

In Manual mode, the throttle lever should be set to the third mark from the bottom when first engaging the drive clutch. Once the transmission is in gear, the throttle can be adjusted to change speed.

The motors are controlled by the steering levers, one on each grip. To turn in one direction, squeeze the lever on that side. The more the lever is moved, the sharper the turn will be; a fully closed handle causing the wheel to stop, letting the snowblower turn in place.

Transporting with the Engine Off

The electric drive motors can be used with the engine shut off for transport. To enable this mode, release the drive clutch, shift into neutral, and turn the engine switch to “ON.” Hold down both steering levers for three seconds. The red and orange drive control warning indicators on the control panel will blink. Engage the drive clutch, and the snowblower can be controlled normally. Keep in mind that using this mode for more than three minutes can drain the battery to a point that it can’t start the engine. After the drive clutch lever has been open for 5 seconds, this mode will shut off.

Get What You Need to Keep Your Snowblower Workings

www.hondalawnparts.com is your one-stop shop for everything Honda from spark plugs to skid shoes. Our site can show you factory parts diagrams and descriptions for parts used on your model so you can find exactly what you need, and we can ship your order to any location in the U.S. or Canada.