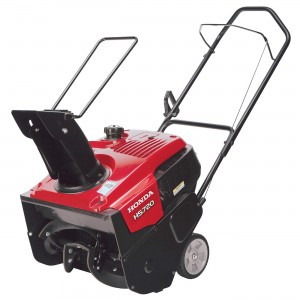 The Honda HS720 snowblower features durable materials and a dependable design geared toward the typical homeowner, but that doesn’t mean the equipment is immune from some common problems and troubleshooting headaches. Whether it’s due to a bit of required maintenance or a mere operator oversight, common problems include a nonfunctioning electric starter, snow discharge issues, and problems with the snowblower’s auger. Though these problems are certainly frustrating, they’re typically easy to diagnose and resolve either at home or with the help of an authorized Honda service technician. Before assuming the worst, review the most common issues facing HS720 snowblower owners and the resolutions to each problem.

1. The Electric Starter Does Not Work

The electric starter is one of the biggest selling points of this Honda snow thrower, making it far easier to start the engine on a particularly cold day. If the starter just isn’t functioning, it’s typically due to one of two common problems. The first of these is an electric outlet that simply lacks enough power to support the electric starter. A second cause of starter problems could be a damaged or defective power cord. To diagnose the problem, try using several electrical outlets. If the starter still does not function, consider purchasing an OEM Honda starter cord from an authorized dealer.

2. The Starter Works, But the Engine Refuses to Start

While the electric starter can sometimes fall victim to a poor electric outlet or a damaged cord, it’s not the only thing that prevents the snowblower from starting properly. The engine itself can sometimes refuse to start, causing headaches for homeowners who aren’t sure how to resolve this issue. First and foremost, it’s important to check whether or not the engine has a sufficient fuel supply. If not, gasoline should be added and ignition should be attempted a second time.

If the snowblower’s fuel level doesn’t seem to be the issue, there are other ways to troubleshoot the problem. Even a full fuel tank could be housing stale fuel, which would simply prevent the engine from starting. Drain this fuel from the tank and carburetor, replace it with fresh gasoline, and try again. If fuel itself is not the cause of the problem, check that the engine switch and fuel valve are both on and adjust them appropriately if they’re in the “off” position. Finally, it might be a good idea to make sure that the spark plug cap is connected and that the spark plug itself is properly capped.

Even if the engine turns on, operators may find that the auger isn’t working at all. In this case, the problem is likely attributable to a clog somewhere in the equipment. Check the snowblower’s intake and discharge chutes, its gears, and the auger lever. If a clog is present in any of these areas, melt it or chip it away so that the auger can move freely. Broken gears may also cause problems with auger operation. Replacement of these gears may require the assistance of a Honda professional.

4. The Engine Has Low or Inconsistent Power

Engine power issues typically are caused by clogs or excessive snowfall. First, check that the snowblower’s chutes, gears and auger lever are free of accumulated snow and ice. It’s also a good idea to reduce the snow-throwing swath if the equipment is moving very heavy, wet snow. In deeper or wetter snow, operators should reduce their ground speed in order to increase the snowblower’s processing time of any discharged snow and ice. This may reduce problems with inconsistent engine power. Other causes include an improperly gapped spark plug, stale fuel, or a choke lever that is not in the “open” position during snow clearing.

5. Snow Does Not Discharge Properly

If the snowblower isn’t throwing snow properly, the cause is typically a clog in the discharge chute. Discharge issues may also result from an excessive ground speed or a larger-than-normal snow-throwing swath. In some cases, the Honda snowblower may exhibit snow discharge issues because of problems with the drive belt. Resolving this problem requires professional service from an authorized dealer.

6. The Engine Stalls with the Clutch Lever Engaged

Engine stalling occurs with an engaged clutch lever only when excessive snow has built up around the gears or discharge area. Stop the snowblower and check for clogs, melting or manually removing them until the snowblower’s engine can remain powered consistently.

Solve Common Problems with the OEM Parts Found at HondaLawnParts.com

The most common way to resolve common snowblower issues is with a bit of maintenance. Whether that means adding fuel, checking and changing the spark plug, or seeking professional service from a Honda professional, HondaLawnParts.com can help. With an extensive selection of OEM Honda replacement parts that can be narrowed down by snowblower model, engine manufacturer or part number, equipment owners will find it easy to diagnose and resolve common problems throughout the winter months.