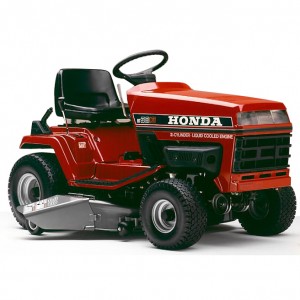 Are the blades of your Honda HT3813 not spinning anymore, even though the deck and belt are in good shape? It may be time to replace the PTO clutch. This repair is more complex than most maintenance tasks, but it’s still within the means of the home mechanic.

Where is the Clutch?

Unlike most small lawn tractors, the HT3813 uses a horizontal shaft engine. The blades are driven by a belt that travels from the pulley on the deck, bending at a 90 degree angle to reach the drive pulley mounted at the front of the shaft. The front of the PTO clutch is mounted on the drive pulley and the friction plate is mounted directly behind the pulley on the engine shaft. The radiator fan and radiator are mounted directly in front of the pulley and must be removed for access to the clutch.

Since the radiator needs to be drained and removed, now would be a good time to replace the coolant.

Since this repair involves working around the engine and cooling system, the engine should be allowed to cool completely before you begin disassembly. Disconnect the negative battery terminal to prevent an accidental start or short.

If the brake friction plate needs to be replaced, loosen the bolts on the plate, then unbolt the motor mounts from the frame. Lift the engine up using a jack until the arms of the plate are above the frame. Pull the old plate off the shaft and slide on the new one. Once it’s bolted down, lower the engine and reinstall the motor mount bolts.

On the pulley, remove the three bolt holding on the backing plate. This should expose the clutch and clutch plate. When reassembling the clutch, make sure the slots line up to make space for the key.

Reassemble the mower in the reverse order you took it apart. After placing the belt over the pulley and bolting on the belt guard, check the tension and adjust it using the tension knob below the front of the tractor. Remember to put the grounding wire back on the left radiator bolt, refill the radiator and reconnect the negative battery terminal.

Buying New Parts for Your HT3813

Whether you need a new clutch, belt or key, you can order it from www.HondaLawnParts.com. We’re a certified Honda small engine dealer, shipping parts for everything Honda from lawn tractors to water pumps across the U.S. and Canada. Ordering is easy with our advanced part lookup system which has built-in parts descriptions and factory diagrams to help verify your order.