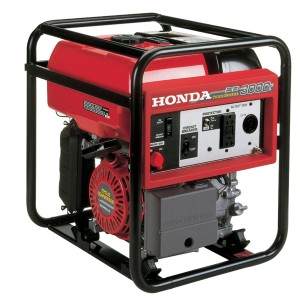 Need a generator? Honda’s reliable engines, automatic power control and high-quality components make their generators a great choice. Which Honda generator should you buy, though?

That depends on how and where you’ll use it.

Which Kind of Generator Do I Need?

Honda divides their generator lines into industrial, recreational and home use. These are the main differences between the models:

Despite these classifications, your needs may fit a different application. For example, if your area has noise ordinances, you may need a quieter EU series instead of an EM or EG Series.

If you’re looking into using the generator as a backup for grid power, it will need to be wired into a transfer switch. This isolates your home’s electrical system to prevent “backflow,” which is the flow of current back into the grid or the generator. Without this switch in place, the changes in power could cause generator fires and electrocute anyone working on the system.

Home appliances typically run on 120-volt power, but some items like well pumps, require 240-volt power. All Honda generators are single phase, so they can’t power devices that require multiphase power like welders.

How Much Power Do I Need for My Home?

For the majority of homes, 3,000-6,500 watts is enough to power most household appliances. Which end of that range your home falls in depends primarily on the type of heating systems and water source it uses.

To get the best estimate of the power required, use a load tester to get accurate measurements. Keep in mind that quoted wattage is generally for output: a 1,000-watt microwave produces 1,000 watts of heat, but needs more power than that due to inefficiencies and non-heat loads like the turntable and display. If you know the appliance’s power in amps, multiply that number by the voltage it uses, either 120 or 240.

For other electric motors, you should assume they need three times as much wattage available as it takes to run one of these devices. That means an appliance that normally draws 200 watts can have a power spike of around 600 watts when first started. Keep in mind that you don’t need to buy a generator that supports the maximum draw for everything at the same time: you can simply use these appliances at different times to reduce the maximum load.

If you plan on powering heating systems in your home, the requirements can vary widely depending on the type of system. Gas and oil-based systems need at least 2,500 watts; the total power required will depend on the demands of the fan motor. Electric furnaces usually require at least 15,000 watts, which is well beyond the output of a regular generator. Gas or oil-powered hot water heaters require at least 2,500 watts, while electric heaters will need at least 4,500 watts.

Have a well pump? It will need 240-volt power, requiring a larger generator regardless of total power needs.

How Much Power Do I Need for my RV?

The biggest factor in power consumption will be the A/C unit. 3,000 watts is enough to power most 13,500 BTU air conditioners. but 7,000 watts is needed for dual A/C units. If your RV’s air conditioner falls somewhere in the middle, you might want to consider running a pair of EU2000i Companions to get 4,000 total watts.

How Much Power Do I Need for Recreational Usage?

If you’re tailgating, boating or camping, 1,000 to 2,000 volts should be plenty for powering small appliances. To get the most accurate estimate, use a load tester on the appliances you plan on taking with you.

How Much Power Do I Need to Run Tools?

The power requirements of industrial equipment varies widely, so your needs will depend on the job. Along with using a load tester, you can usually find power requirements on the label of most electric tools. Keep in mind that motors lose efficiency with age, so the actual power used may be higher than what is stated.

Where Can I Get Parts for Honda Generators?

When you need parts, order them from www.HondaLawnParts.com. We’re a certified Honda dealer specializing in OEM parts for their small engine equipment. We have most parts in stock, and can ship to any address in the U.S. or Canada.